Picture this: March 31st 2016; Fifteen intrepid explorers leave their homes in Kildare and the midlands to set out for the frozen wastes of Iceland, armed only with…. cameras, tripods, lenses, filters and God knows what else. Okay, so it wasn’t exactly an arctic expedition but judging by the amount of gear some people were hauling through check-in at Dublin airport, it could have been.

The group included Con Doyle and Paddy-Joe Ryan from Athy, Alf Kelly from Mountrath , Philomena Brady from Slieve Bloom and Caroline Fahey while the Newbridge-based South Kildare Photography Club was represented by John Leahy, Kieran Commins, Kevin Lumsden, Noel Buckley, Kenneth Kelleher, Barry Murphy, Andrew Hogg, Dave Ennis, Eltin Jones and his long-suffering wife, Vicki (that’s me). As the non-photographer in the mix, I rapidly realised two things: firstly, that there would be no shortage of wit and wise-cracks and secondly, that I was about to inadvertently learn a lot about photography.

On arrival in Reykjavik, the bus transfer to our hotel included an unusual stop-off in the form of a trip to the Blue Lagoon. It was out of the coach, queue up in the icy wind, go inside and don the swimming attire before plunging into a hot outdoor pool. Invigorating and downright daunting for some of us. Clearly enthusiastic, John Leahy got down and dirty, covering himself in the “healthy” mud.

Afterwards, the tour guide informed us that as Iceland gets all its electricity and hot water from the natural volcanic environment, the lagoon was effectively formed as a by-product of the generation of geo-thermal energy. That would be a bit like the Irish building tourism around ‘bog baths’. It’s a wonder we haven’t done it.

Reykjavik itself proved picturesque, with our centrally located hotel surrounded by traditional buildings as well as dramatically modern ones like the Harpa concert hall and conference centre, the façade of which provided an ever-changing evening light show.

A city tour on the first morning included the renowned Hallgrimskirkja church, a striking piece of modern architecture, although there was disappointment with the weather as photographers don’t like raindrops. Most, however, took the opportunity to revisit it later in the day when the weather brightened up.

There were some spectacular views from the top of the Perlan (Pearl), a massive dome constructed to conceal the enormous water storage tanks which serve the city. Complete with café and shop, this was another great example of how a potential eyesore can be transformed into a tourist attraction.

That evening was set aside for the Northern Lights. The coach took us to a point well outside the city and parked. The lads got out and set up the tripods… and waited. Back on the bus, coming close to midnight, the entertainment wasn’t lacking. A group of Cork ladies took to singing, while one of them remarked that watching for the Northern Lights was “a bit like Ballinspittle”.

Outside, it was cold but we got a lesson in astral imagery when we realised that the cameras were seeing shapes and colours not actually visible to the naked eye. The best display came just as the bus was about to pull off. There was frustration for those photographers who had already packed away their gear but for the rest of us, it was just a case of enjoying the moment.Getting to bed at almost 2am isn’t great when you have to be up before 7am but there was no choice as Day 3 was the South Island trip.

There was relief for the rest of the coach occupants when the “camera crew” were dumped off and despatched to our own mini-bus, enabling us to go (a bit) off the beaten track. This trip encompassed everything from visiting the grave of famous US chess player and Icelandic resident Bobby Fischer, in a tiny churchyard beside a farm, to spending time on the awesome - and potentially dangerous - Black Beach and climbing behind the magnificent Seljalandsfoss waterfall. (Unfortunately, this wasn’t as easy as it looked….)

There was also a visit to a farm hit by the 2010 eruption of nearby volcano Eyjafjallajokull, resulting in the ash cloud which grounded aircraft worldwide. There was a fascinating video on the how the family had coped and, indeed, survived to turn the disaster into an advantage in tourism terms.The final trip of our Icelandic adventure, on Day 4, was along the Golden Circle to the north of the island. This included Thingvellir National Park, with a walk through a gorge steeped in Viking history, and a visit to the geysers at Geysir and Strokkur.

Watching one of these erupt, standing back from the spray and hot steam, was a challenge for the photographers: How to get a good shot while keeping yourself (and the camera) dry.There was a visit to the Skogar open air museum with reconstructed homes showing the evolution of dwellings on the island and a chance to get up close and personal with some of the famous wild Icelandic ponies, while the Golden Circle also included the impressive Gullfoss waterfall.Dramatic scenery abounded and the one complaint was that more time would have been needed, and more opportunities to just stop off by the roadside.

On one of the final stops, Paddy-Joe and Eltin apparently decided to take some more time by going off in the wrong direction, leaving me to wonder if I’d finally lost my husband. Thanks, by the way, to Kevin Lumsden and the rest of the comedians on the bus for their suggestions as to how this mightn’t be a bad thing!A last-night gathering at favoured spot, the Sky Bar, overlooking the harbour, brought the consensus that this had been a successful trip, enjoyed by all. Booked with the Travel Department, the tour guides were excellent, informative and even tolerant of all that lugging on and off of camera equipment! 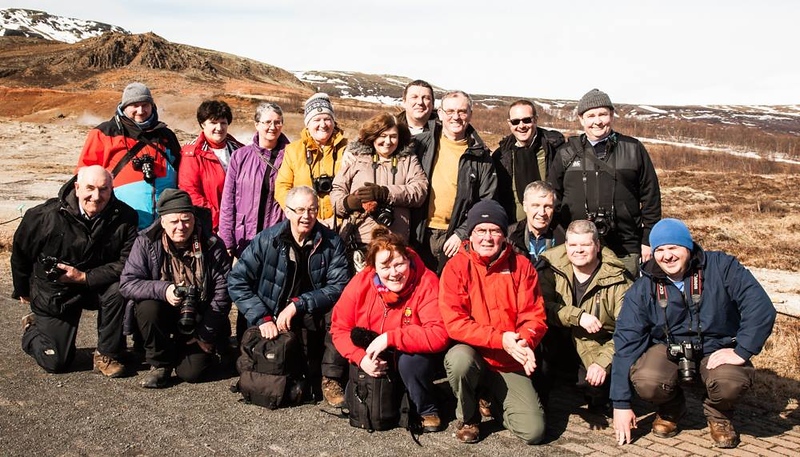 SKPC and Friends in Iceland